The throwing stars are set to compete in Florence 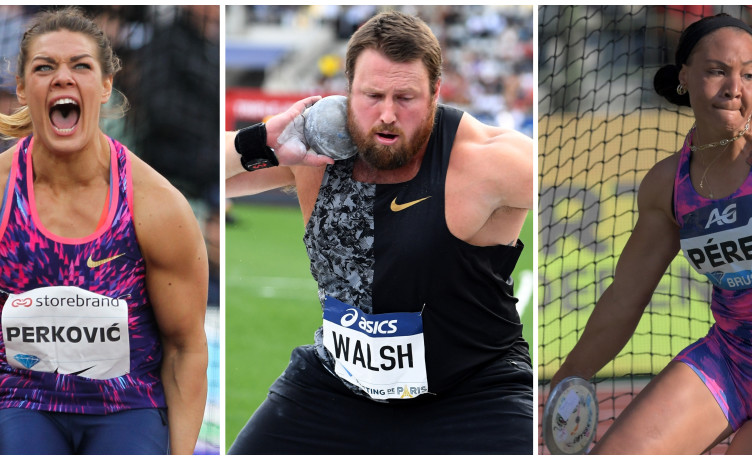 Next Thursday Tom Walsh will take on Michal Haratyk and Tomas Stanek in the men’s shot put in the third leg of the Wanda Diamond League. Olympic champion Sandra Perkovic will face world champion Yaimé Perez in the women’s discus throw

Powerful men and women, technical feats to enjoy live or in front of television. Throwing events at the Golden Gala Pietro Mennea, the third leg of the Wanda Diamond League, promise to be a big show: next Thursday red hot runways with the men’s shot put and the women’s discus throw. There is a possibility that both the meeting records could be broken. They were set by two athletes, who are competing in Florence: Konrad Bukowiecki (21.97m at the Olympic Stadium in Rome in 2019) and Sandra Perkovic from Croatia (68.93m in 2018).

Men’s shot put: Could the first throw over the 22m barrier be set in the history of the Golden Gala ? On paper the cast of athletes can achieve this goal, starting from Tom Walsh from New Zealand, who won the world bronze medal in the most spectacular shot put competition of all-time, when he finished third with 22.90m. In the past days the Rio 2016 Olympic bronze medallist and London 2017 world champion has never done worse than 21.62m and won the Diamond League meeting in Doha. Florence is the best stage for his first 22m throw of the year, one month and a half before the Olympic Games in Tokyo, where he will be among the main candidates for the podium. The very strong Polish shot putter Michal Haratyk has already thrown over the 22 metres barrier this season with 22.17m in mid-May, after losing the European throne on home soil in Torun, where he finished second to Tomas Stanek, who als set a PB over the 22 metres barrier in his career. Serbia’s Armin Sinancevic has joined the big group of European throwers by improving his PB with a big throw of  21.88m in the past weeks. Konrad Bukowiecki, who won the Golden Gala two years ago with the meeting record of 21.97m, is trying to return to his best form. Among the stand-out European names Filip Mihaljevic from Croatia should not be written off. The Golden Gala is the most eagerly awaited meeting for local star Leonardo Fabbri, who will compete in his native Florence on the shot put circle, where his talent blossomed. He can continue improving after producing 20.77m in Chorzow and 20.50m in Conegliano and get back to his form in 2020. The other Italian athlete to follow is Zane Weir, who put the shot over the 21 metres barrier twice this year and improved his PB to 21.11m last February.

Women’s discus throw: Sandra Perkovic wore the crown at the Golden Gala three times in 2013, 2015 and 2018. The Croatian star boasts an impressive curriculum, which includes a double olympic gold medal and a double world title. She will be bidding to score her fourth win in the discus throw competition, which opens the 41st edition of the Golden Gala at the Asics Firenze Marathon Stadium at 18.45 next Thursday. She improved her seasonal best to 66.11m in Montreuil. The biggest threats come from Cuban throwers Yaime Perez and Denia Caballero. World champion Perez has already come close to the 70 metres barrier with 68.99m. The Olympic bronze medallist and Beijing 2015 world champion Caballero has the experience to produce a big throw. The line-up is completed by Liliana Ca from Portugal, winner at the European Team Championships in Chorzow, German throwers Claudine Vita and and Kristin Pudenz, Olympic silver medallist Meiina Robert Michon. Italian thrower Daisy Osakue is aiming to perform well against world-class athletes, after returning from the United States, where she produced a seasonal best of 61.19m last March.