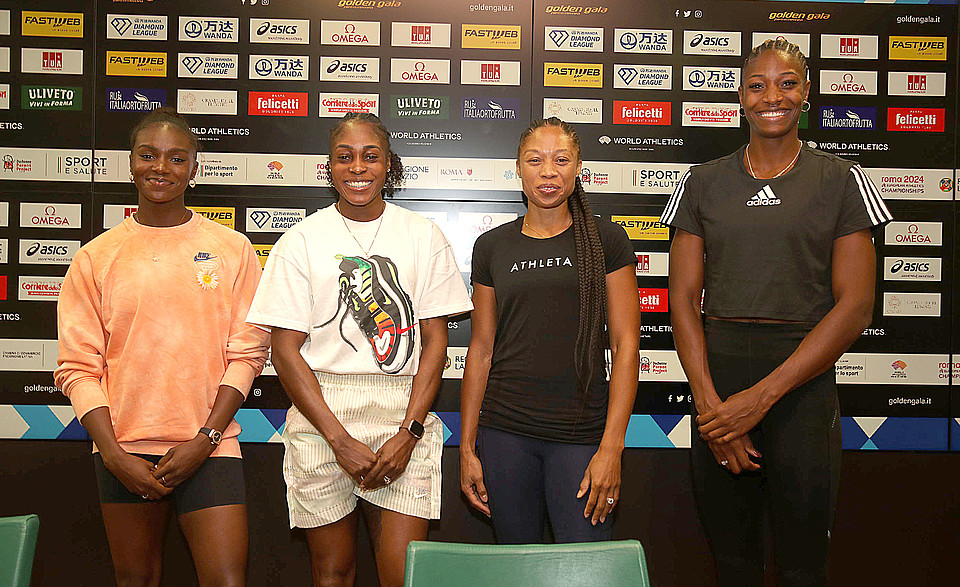 World athletics stars spoke with media representatives from all over the world during the press conference the day before the 42nd edition of the Golden Gala at the Olympic Stadium in Rome.

The women’s 200 metres sprint showdown is supposed to be the highlight of the meeting in the Italian capital. Five-time Olympic champion Elaine Thompson Herah will clash against double 400m Olympic champion Shaunae Miller Uibo and US sprint legend Allyson Felix.

Allyson Felix will compete for the eighth and final appearance in her career in the Golden Gala during her farewell season. The multiple Olympic and world medallist won twice in her career in Rome the 400m  race in 2008 (50.25) and 2011 (49.81). The Rome meeting will be the chance for Felix to say goodbye to her Italian fans.

Allyson Felix: “Every race is really special. It’s such a different experience than I had before. I am taking the moment. I am so grateful for all the experiences and for all the people who supported me. I am trying to enjoy every moment”.

“I am taking each race one by one and seeing how it comes together. I am trying to do the best I can”.

Elaine Thompson Herah has become the first woman in history to win the 100m and 200m titles in two consecutive editions of the Olympic Games.

Elaine Thompson Herah: “I had a little shoulder problem at the beginning of the season. I am not hundred percent fit but I am a true fighter. I opened my season at the Mount Sac Relays in Walnut. Every time I race, I have a discomfort. I hate talking about my injuries, as I don’t want to take them as an excuse, if I perform badly. I just take my races to see where I am two weeks before the National Championships. The World Championships in Eugene are my goal for this season. I have a lot of to work to do. Every season speaks for itself.  Last year was spectacular. I would like to repeat it this year but I am in no rush. I want to have a healthy season. I want to win the gold medal, but every medal I get, I will respect that. I am now training with my husband. I receive all the support that I want. I think I have chosen the right path”.

Shaunae Miller Uibo will run her first 200 metres race since the Olympic Games in Tokyo.

Shaunae Miller Uibo: “I am excited to see how it goes. It’s a great line-up. I want to put on a big show for the crowd. I am proud for what I have accomplished in my career so far. There is always motivation. There is still a world record out there that I would love to break. There is the 48 seconds barrier I want to break, but the main thing is to have fun. There is a great line-up. We will push each other to a good performance”.

Nobody has broken the 22 seconds barrier in the history of the Golden Gala. The meeting record held by Dina Asher Smith could be under threat tomorrow.

Dina Asher Smith: “I am really excited for tomorrow. It’s going to be an amazing line-up. I am privileged to be part of this race in Allyson’s retirement season. Allyson has been a legend. She has been an icon for her grace and dignity. I worked as a volunteer as a kit carrier during the Olympic Games in London. I have been a big fan of Allyson for many years. Last year I had a roller coaster season because of the injury I had before the Olympic Games. It’s part of what you have to deal with. I have a degree in history and I always enjoy competing in Italy. Florence is amazing. We had the press conference in such an amazing building. It’s fantastic to be in Rome. I am fortunate that my career takes me to such interesting cities”.

Malaika Mihambo started her season in great shape and set the world seasonal lead with 7.09m in the Birmingham Diamond League meeting. The German long jump star is looking to repeat her great performance in the 2019 edition of the Golden Gala, when she won with 7.07m.

Malaika Mihambo: “I feel very well, compared to the past two years, when I struggled to find back my strength. After the first lockdown I struggled to get back to my stability. Now I feel that I am back to where I left the stage in 2019. I realised that I was in good shape. It was extraordinary to start the season with 7.09m. I was really happy about it.  Being in good shape is one thing, but performing well in the first competition is difficult”.

Last year Mihambo produced the best jump of the day in the Florence Golden Gala meeting, but Ivana Spanovic beat the German athlete in the Final 3 showdown, according to last year’s Diamond League rule in field events.

“Luckily the rule has changed this year. It was not a rule for the athletes and it’s not good for the motivation. I don’t know if it was interesting to watch. Now we have a new rule and I think it’s better. This year the best jumper of the day wins and that makes it more exciting. It’s difficult for the leader because you have not the last say. The others can beat you”.

Mihambo has passion for travelling to exotic places.

“I travelled to India twice. I enjoy meditating there and I like the history, the nature, the culture, the people of these countries. I have also been to Thailand and I stayed there for a month. I meditated there, I also like Finland. I am curious about the world”.

Fred Kerley: “I won the Olympic silver medal in the 100m. Nothing has really changed in my life. I am getting the speed down. I have continued to work hard. You know when you are chosen for destiny for something. This is why I chose to run the 100 metres. The 400 metres will come later on this year”.

Unfortunately the 100m showdown against Marcell Jacobs will not take place after the Italian sprint star was forced to pull out of the meeting due to an injury.

“I am not looking for a revenge against Marcell Jacobs. I am focused to run as fast as possible every time I hit the track. I like to compete. Every time he is on the track, I want to beat him”.

Olympic 100m hurdles champion Jasmine Camacho Quinn was smiling and in good spirit ahead of her second appearance at the Golden Gala. Last year the Puerto Rican athlete improved the Golden Gala meeting record after 41 years with 12.38 in Rome. Camacho Quinn has won 20 of her past 23 races and has remained unbeaten in her most recent competitions clocking 12.45 at the Prefontaine Classic in Eugene, 12.56 at the Golden Spike in Ostrava and 12.43 in Chorzow.

Jasmine Camacho Quinn: “I am pretty confident ahead of tomorrow. It’s my third time in Italy but my first race in Rome. It’s really beautiful here and very hot. I am just looking forward to competing in the Olympic Stadium. I enjoy listening to rap and R&B music before competitions”.

Eugene will host the World Championships in one month time in the iconic Hayward Field. Camacho Quinn and Mihambo were asked about their excitement for Eugene.

Camacho Quinn: “I am excited about the World Championships in Eugene. The stadium is completely different as it has been renovated but it’s the same area. It brings me back memories. It’s not a new setting from college. This is something I am used to”.

Mihambo: “I have never been to Eugene. I want to give my best. I am curious to see how the stadium is”.

This year crowd will return to the Olympic Stadium after the meeting was held without spectators due to the pandemic.

Kerley: “I like the empty stadium more. It was quiet and I could hear my coach!”

Camacho Quinn: “I am excited to have fans. It was dead in the past two years. I feel that we are coming back to normal life. I am looking forward to hearing the fans”.

Mihambo: “For jumpers the support is very important. We play with the audience. I really enjoy to feel the noise, the rhythm, the clapping from the crowd”.

Gianmarco Tamberi: “I finished second or third in the past editions of the Golden Gala but I have never won in Rome. I started the season with some difficulties. The Golden Gala is my penultimate competition before the World Championships in Eugene. The Golden Gala is going to be one  of the best competitions of the season, I always receive a lot of support from the Italian crowd. It’s time to win in Rome. I feel that I can jump high. I am happy to jump again in a full stadium after the restrictions due to the pandemic. I am sorry for Barshim. He is injured and is not able to compete in Rome. I am also sorry that Marcell Jacobs cannot partecipate. It’s better for him to get back to full fitness for the World Championships in Eugene. In every competition I try to improve my seasonal best”.

Femke Bol is aiming to win in the Golden Gala for the third time in a row. Bol arrives in Rome in good shape after setting the world all-time best in the 300 metres hurdles in Ostrava with 36.86 and the meeting record in Hengelo in 53.94.

Femke Bol:“I competed in Rome in a completely empty stadium in covid times. I am looking forward to competing again in a full stadium. I did not expect to run a very fast time in the 300m hurdles in Ostrava. It was a nice surprise, but the 400m hurdles are a completely different distance”.

Athing Mu will compete for the first time in a Diamond League meeting outside the United States. The US 800m star won in the Prefontaine Classic in Eugene last August breaking the US record with 1:55.04 just a few weeks after her Olympic gold medal in Tokyo. Mu is celebrating her 20th birthday today.

Athing Mu: “I will remember my first competition overseas in Rome for the rest of my life. I will not celebrate my birthday with a cake today. My birthday comes at the time of competitions. Running a fast time and winning the race tomorrow will give me the chance to have a bigger celebration than usual. I will have it when I am back home. It’s my first Diamond League race in Rome. Competing against great athletes like Keely Hodgkinson makes us push each other. The world record held by Jarmila Kratochvilova will come with time”.