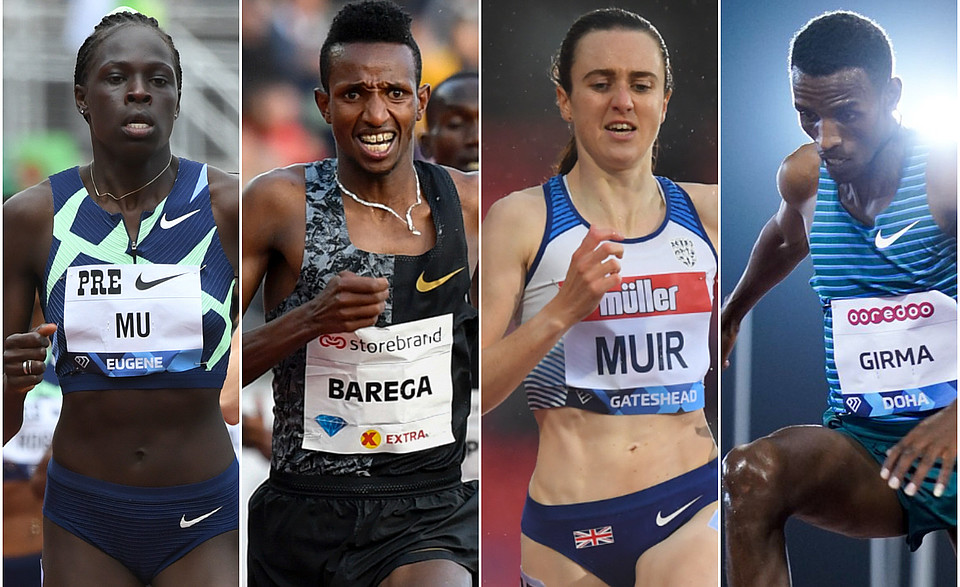 Two reigning olympic gold medallists (Athing Mu and Selemon Barega) and two Tokyo Olympic silver medallists (Laura Muir and Lemecha Girma) will headline four thrilling middle distance races at the Golden Gala Pietro Mennea. They are going to be head-to-head races to enjoy until the final metres. Together with them, the line-up also features olympic and world medallists of the past editions.

Athing Mu will turn 20 on the eve of the Golden Gala and has a bright future ahead of her. Mu will try to uphold her results after the double Olympic title last year in Japan in the 800 metres and in the 4x400 relay; her season passes through the Olympic Stadium and her first Diamond League race outside the United States. She made an outstanding debut in the Diamond League with a national record of 1:55.04 in Eugene after the Olympic Games in Tokyo, moving up to eighth place in the world all-time list. She is the number one favourite for her tactical ability and her physical skills, but she will face three middle-distance runners with a sub-1:57 time in the Rome evening: Jamaica’s Natoya Goule, who improved her PB to 1:56.15 four years ago and clocked 1:56.44 last year, Cuba’s Rose Mary Almanza (PB 1:56.28 in 2021) and Jemma Reekie from Great Britain, who came very close to the medal with her fourth place with 1:56.90. The line-up also features Uganda’s Halimah Nakaayi, who won the world outdoor gold medal in Doha and Ethiopia’s Freweyni Hailu, the world indoor silver medallist in Belgrade. The other top athletes in the line-up are Renelle Lamote from France, Mary Moraa from Kenya, Lindsey Butterworth from Canada, and improving Italian middle distance runner Elena Bellò.

The stand-out name in the women’s 1500 metres is Laura Muir, reigning Olympic silver medallist (with a phenomenal 3:54.50), who has already won a Diamond League race this season in Birmingham. The British middle-distance runner will face many rivals like Canada’s Gabriela Debues Stafford, who clocked 3:58.62 in Eugene, Uganda’s Winnie Nanyondo, Ethiopian runners Axumawit Embaye and Hirut Meshesha, who won the silver and bronze medals respectively at the World Indoor Championships in Belgrade. The other names to watch are Ethiopia’s Habitam Alemu and US Cory Ann McGee. The best European athletes in the field are Italian middle distance runner Gaia Sabbatini and Cross Country specialist Karoline Bjerkeli Grovdal from Norway.

The men’s 5000 metres race, one of the most traditional race at the Golden Gala, promises to be another thrilling competition. Two world records were set in the Olympic Stadium (Moroccan runner Said Aouita became the first runner to break the 13 minutes barrier with 12:58.39 in 1987 and Kenya’s Moses Kiptanui clocked 12:55.30 in 1995). The meeting record has been held by Kenyan legend Eliud Kipchoge for 18 years (12:46.53 in 2004). The line-up for the meeting on 9 June lives up to such an illustrious history. The athlete in the spotlight is Olympic 10000 metres Selemon Barega from Ethiopia, who clocked an amazing PB of 12:43.02 in 2018. This year Barega has already celebrated the world indoor title in the 3000 metres in Belgrade. The other Ethiopian runner on the rise is Berihu Aregawi, who set the current world lead of 12:50.05 with a solo race in Eugene. The other top athletes lining up are Tokyo silver medallist Mo Ahmed (Can), two-time world champion Muktar Edris, world 10000m silver medallist Yomif Kejelcha and 2019 Golden Gala winner Telahun Haile Bekele. The Kenyan challenge is led by Nicholas Kipkorir Kimeli, who finished fourth at the Olympic Games in Tokyo. The European hopes are carried by Spain’s Mohamed Katir and Italy’s Yeman Crippa.

Lamecha Girma has just broken the 8 metres barrier in Ostrava last Tuesday with the world-class time 7:58.68. The olympic silver medallist from Ethiopia will chase the win in the Olympic Stadium in a race, that features two specialists who came very close to reaching the Olympic podium, like Ethiopia’s Getnet Wale and Eritrea’s Yemane Haileselassie, who finished fourth and fifth respectively in Tokyo. The Kenyan challenge is led by Rio Olympic gold medallist and two-time world champion Conseslus Kipruto, who won in the Rome leg of the Diamond League three times in a row (2016, 2017 and 2018). The line-up also features Abraham Kibiwott and Leonard Kipkemboi Bett. The Italian trio formed by twins Ala and Osama Zoghlami and Ahmed Abdelwahed can get excited on home soil.

This extra competition has been included in the programme to celebrate the 20 km olympic champion Massimo Stano, who won the 20 km race at the Tokyo Olympic Games on the roads of Sapporo. The Italian walker is the most eagerly awaited athlete in the 3000m walking race on the track, which returns to the Golden Gala programme 32 years after the last time in the edition held in Bologna in 1990. A specialist of longer distances, like 50 km Olympic silver medallist Jonathan Hilbert from Germany, will also line-up over this fast distance to cover at a very fast pace. Spain will be represented by Diego Garcia Carrera, who finished sixth in the 20 km Olympic race. Many Italian walkers, including 20 km specialist Francesco Fortunato, will join the field.