Stars are ready to thrill Florence 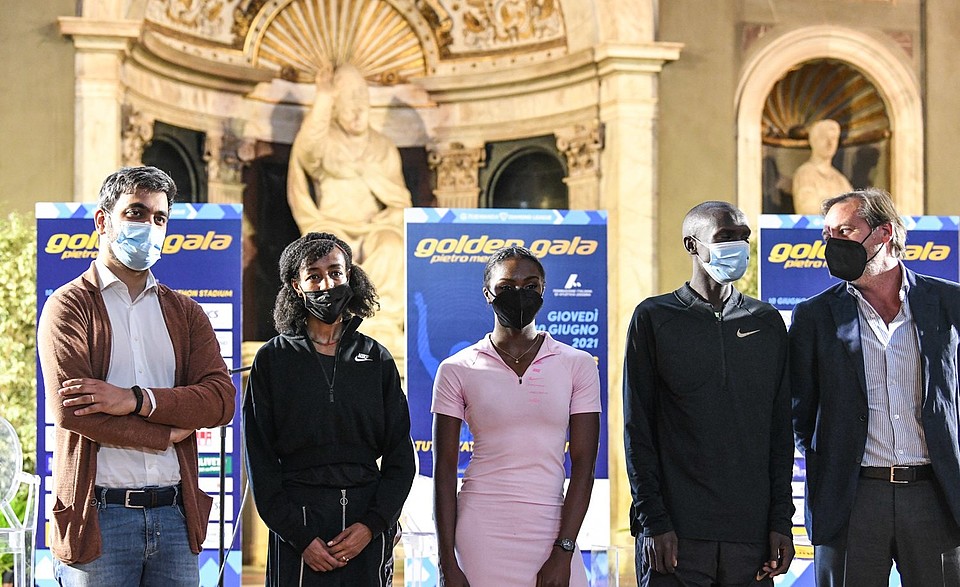 World 5000m and 10000m record holder Joshua Cheptegei is the most eagerly awaited athlete of a star-studded 5000m race at the 41st edition of the Golden Gala at the Asics Firenze Marathon Stadium in Florence. The Ugandan star attended the press-conference of the major Italian meeting in Palazzo Vecchio in the centre of Florence together with the other stars Sifan Hassan, Dina Asher Smith, Mutaz Barshim, Gianmarco Tamberi, Malaika Mihambo and Larissa Iapichino.

Cheptegei is aiming to run a very fast time and even break the meeting record held by Eliud Kipchoge with 12:46.53 since 2004.

“I am fascinated by Florence. I have rarely been in such a beautiful place. I think that the meeting record is in danger tomorrow with a good organization of pacemakers. I hope I can target 12:40 or faster on Thursday. I will face Jakob Ingebrigtsen, who is the athlete of the moment. He ran very fast times when he was a teenager. He continued improving even during the pandemic. He is a great rival. About the new shoes, I am in favour of innovation. I am not sure how many seconds we can gain with the new shoes. I think it depends on each athlete”

“I am in good shape. I am happy to have the opportunity to run against great athletes. The 1500m is very exciting at the moment. Losing the WR just two days after breaking it makes me more motivated to work harder.  I am not surprised that Gidey ran faster than me, and and I am actually happy about it. One of my biggest rivals tomorrow is Laura Muir. She clocked 3:55.16. It is never easy to compete against her”

Dina Asher Smith, a history graduate at the King’s College in London, was impressed by the Salone dei Cinquecento in Florence.

“I feel honoured to be in this amazing city. I have never looked at the ceiling so much in a press conference. I am excited to run in Florence. I did a good block of training and I hope to put together another good performance. I am impressed by Shelly Ann Fraser’s 10.63 in Kingston last Saturday. I am always competitive and I hope to be able to compete at the same level with her, but you cannot ignore the fact that she is an amazing athlete. I need competitions to warm up and navigate through the season and be sure that I get to the Olympics in the best possible shape. I have to get rid of rust”.

The men’s high jump featuring Gianmarco Tamberi, Mutaz Barshim, Ilya Ivanyuk and Maksim Nedasekau is one of the highlights of the meeting. This competition is dedicated to the memory of 2004 Olympic finalist Alessandro Talotti, who passed away last May at the age of 40.

European Indoor silver medallist Gianmarco Tamberi had to settle with third place with 2.20 in his opening competition of the summer season.

“I am looking forward to competing in Florence. We will finally receive the support from our fans. They are very important. It’s the start of the most important season of my career. I am doing everything to return to my best shape for the Olympic Games. Mutaz Barshim is a very good friend. I am proud to share my career with such a great athlete. It’s a pleasure to compete against him for the first time since the World Championships in Doha 2019. This competition will be very special, as it is dedicated to Alessandro Talotti, who died too early”.

Mutaz Barshim has held the Golden Gala record since 2014 with 2.41m.

“I am very happy to return to Italy. It’s fantastic to be in Florence. I love history and art. I don’t know if I will have the chance to visit the city, but I want to return here with my family in the future. I was proud to defend my world title in Doha in 2019 in front of my fans after a difficult season. I want to build up to the Olympic Games step by step. I have won the Diamond League three times and I have a good place in my house for another Diamond Trophy. I grew up in an athletics family and I have always watched these meetings since I was a child. I think the Diamond League is the best competition in the world. Competing against the best athletes helps me perform better. I love pressure.”

Larissa Iapichino will compete in front of her home fans on the track, where she started her career.

“It’s such a big honour to compete in my city against great athletes. I am still young, I want to enjoy the competition and make a good experience. I am trying to ignore pressure. I have nothing to lose. I will have the school leaving exams and it’s a very busy period, but I am happy that I will be able to focus on the Olympic Games”.

Malaika Mihambo will return to the Golden Gala two years after winning in Rome with 7.07m. The German long jump star won the German title in Braunschweig last Sunday with 6.65m.