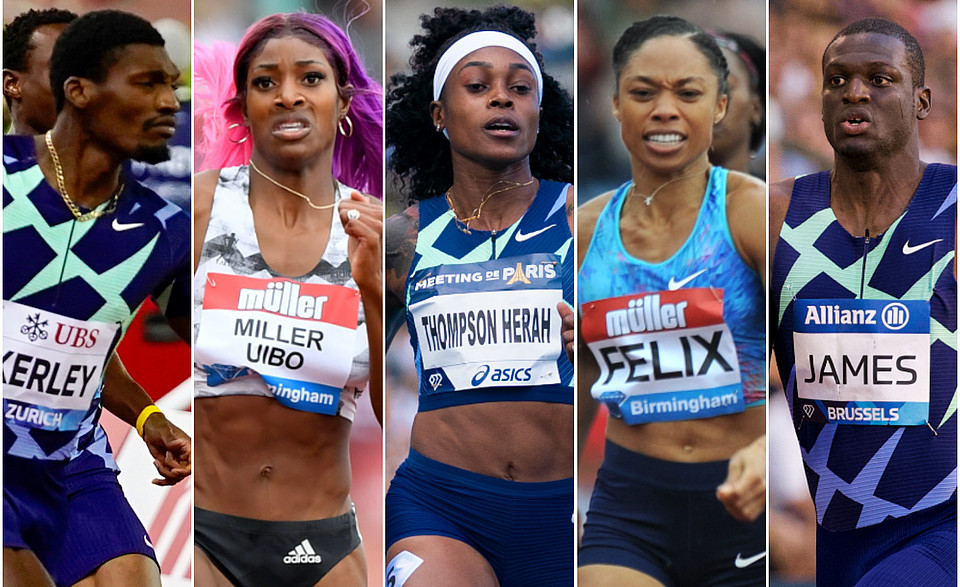 The Olympic stadium at full speed on 9 June: in the 100m the Olympic silver medallist, 200m with the three-time Olympic champion Thompson Herah, and Miller Uibo, Asher Smith and Felix, the 400m with James and the 200m with Bednarek and the Italian 4x100 relay sprinters (ph. Wanda Diamond League)

Fred Kerley is the man to beat in the men’s 100 metres. After olympic champion Marcell Jacobs was forced to pull out of the head-to-head clash, the US olympic silver medallist is the most eagerly awaited sprinter on the track of the Rome Olympic Stadium. The 27-year-old US sprinter born in Texas returns to the Golden Gala four years after his win in the 400 metres in 2018 and continues his build-up to the World Championships on home soil in Eugene, with the goal to improve his seasonal best of 9.92 set in Nairobi. His season has been highlighted by a wind-assisted 19.75 (+2.1 m/s) and his legal 19.80 in Walnut in the 200 metres. Kerley is a versatile sprinter and has joined the very exclusive club of sprinters, who have been able to dip under 10 seconds in the 100m (PB 9.84 in Tokyo), under 20 seconds in the 200m (19.76 in Nairobi in 2021) and under 44 seconds in the 400m (43.64 in Des Moines in 2019). After Bromell and Su have pulled out the Rome race, Kerley will take on the other US sprinters Kyree King (9.98 this year), Marvin Bracy, Mike Rodgers, Isiah Young, Cravont Charleston and Jamaica’s Nigel Ellis.

The Olympic champions in the 200 metres and in the 400 metres, the world champion and the most decorated woman in athletics history: four sprinters for a star-studded 200 metres race in the Olympic Stadium. For the first time in the history of the Rome meeting the 22 seconds barrier can be broken in a race which promises to be one of the most exciting competitions of the meeting for depth and the charisma of the athletes. It will be the chance for five-time Olympic champion Elaine Thompson Herah (three gold medals in Tokyo and two in Rio), the first sprinter in history to score two Olympic double wins in the 100 and 200 metres, and the fastest woman in the world with her PBs of 10.54 and 21.53, which make her the second fastest sprinter in history behind the unforgettable US sprinter Florence Griffith Joyner. After her three wins in the 100m (2016, 2019 and 2020), “Fastelaine” (JAM) will step up in distance to run the 200 metres against double 400 metres Olympic champion Shaunae Miller Uibo (Bah): it’s the first 200 metres race for the one-lap event queen this season. The line-up also features Doha world champion and Berlin European gold medallist Dina Asher Smith (Gbr), who holds the Golden Gala record with her 22.06 set in last year’s edition of the Golden Gala in Florence, and sprint legend Allyson Felix, who won 30 medals (including seven Olympic gold medals and 14 world gold medals). The US sprinter will receive the cheers from the Italian crowd in her final appearance in Rome before retiring from athletics at the end of the season. As if that was not enough, the line-up is rounded out by Shericka Jackson from Jamaica (Olympic 100m bronze medallist, gold in the 4x100 relay and bronze in the 4x400 in Tokyo), Marie Josée Ta Lou from Ivory Coast, who always reached the final at the Olympic Games and won four world medals, Beth Dobbin from Great Britain and Italian sprinter Dalia Kaddari. That’s pure athletics show.

Kirani James has always reached the podium when it matters most: gold in London, silver in Rio and bronze in Tokyo. The 400m sprinter from Grenada will compete for the first time in Italy 13 years after his double gold medal at the World Under 18 Championships in Bressanone, which revealed him to the world as a very young talented athlete in 2009. At the Golden Gala he will face Botswana’s Isaac Makwala and Olympic fourth placer Michael Cherry, Olympic gold medallist with the US 4x400 relay team last year in Japan. Another athlete coming from the USA is Vernon Norwood. Europe will be represented by Dutch record holder and olympic finalist Liemarvin Bonevacia and Ricky Petrucciani from Switzerland.

As an extra non-DL event, the men’s 200 metres do not award qualifying points for the final in Zurich. There is no shortage of interesting topics and there is the chance for the Italian crowd to cheer for the three Italian sprinters Filippo Tortu, Fausto Desalu and Lorenzo Patta, who won the Olympic 4x100 relay gold medal in 37.50 in Tokyo together with Marcell Jacobs. The Italian trio will face Olympic silver medallist Kenny Bednarek (Usa, 19.68) and Trinidad and Tobago’s Jereem Richards, who won the 400 world indoor title, and the 4x400 relay gold medal in London 2017 in the same year when he set his PB of 19.97 in the 200 metres. The line-up also features Luxolo Adams from South Africa, Nethaneel Mitchell-Blake from Great Britain and Joshua Hartmann from Germany.