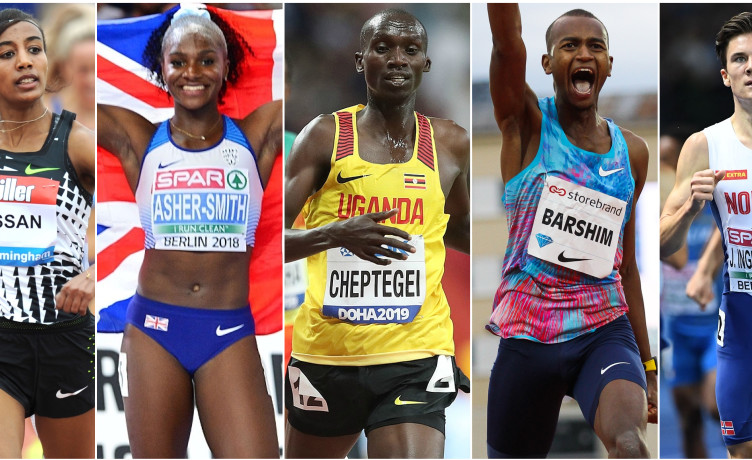 It’s going to be a star-studded night of athletics. World athletics stars will be in the spotlight in Italy at the 41st edition of the Golden Gala Pietro Mennea, the third leg of the Wanda Diamond League. Cheptegei, Barega and Ingebrigtsen will run in the men’s 5000 metres. Asher Smith will headline the women’s 200 metres. Simbine is the top name in the men’s 100 metres. The full line-up has been unvelied.

The 2021 Golden Gala is shaping up as a star-studded meeting. Just a few weeks before the Olympic Games in Tokyo, the 41st edition of the Golden Gala Pietro Mennea gathers the world athletics stars to the Asics Firenze Marathon Stadium on Thursday 10th June. The Italian leg of the Wanda Diamond League offers a spectacular men’s 5000m race. World 5000m record holder Joshua Cheptegei, the phenomenal Ugandan middle distance star and world 10000m champion, will arrive in Italy. Cheptegei smashed the world record to 12:35.36 in Monaco last year. He will face Ethiopian stars Selemon Barega and Hagos Gebrhiwet, who are ranked fifth and sixth respectively in the all-time list with 12:43.02 and 12:45.82, the other Ethiopian runner Muktar Edris, reigning world 5000m champion, and reigning European champion Jakob Ingebrigtsen from Norway. The meeting record and the Italian all-record holder held by Eliud Kipchoge since 2004 with 12:46.53 is under threat.

In middle-distance races the show is not guaranteed only in the men’s 5000 metres. The 10 June evening will be headlined by a talented field in the women’s 1500 metres race, which features world champion Sifan Hassan, who clocked a fabulous 3:51.95 in Doha, Olympic champion Faith Kipyegon and British middle-distance star Laura Muir. In the men’s 3000m steeplechase the Golden Gala will cheer on Olympic and world champion Conseslus Kipruto, who reached the podium in the past four editions of the World Championships. The Kenyan runner will take on world bronze medallist Soufiane El Bakkali from Morocco and Getnet Wale from Ethiopia.

The Golden Gala named after Italian sprint legend Pietro Mennea features many big sprint stars. The top name in the men’s 100 metres will be Akani Simbine from South Africa, who clocked a career best time of 9.89 and won last year’s edition of the Golden Gala in the Rome Olympic Stadium last September. Simbine will take on Italian record holder Marcell Jacobs, Ivory Coast’s Artur Cissé and Chijindu Ujah from Great Britain. In the women’s 200 metres the spotlight will be on Dina Asher Smith, who won the world title over this distance and the 100m world silver medal in Doha 2019. The British sprinter will take on  Marie Josèe Ta Lou from Ivory Coast, 2017 world champion Dafne Schippers from the Netherlands, world bronze medallist Mujinga Kambundji from Switzerland.

Fast times are expected in the hurdles races. In the men’s 110m hurdles race the man to be beatn is reigning Olympic champion Omar McLeod from Jamaica, who will square off against world bronze medallist Pascal Martinot Lagarde, the other Frenchman Wilhelm Belocian and Andrew Pozzi from Great Britain. The women’s 100m hurdles will be highlighted by Jasmine Camacho Quinn, who clocked an impressive 12.32 this season, the improving Devynne Charlton from the Bahamas, European hurdlers Elvira Herman from Belarus and Pia Skrzszowska from Poland, who scored a double win in the 100m and the 100m hurdles at the European Team Championships in Chorzow. The women’s 400m hurdles race will be headlined by 21-year-old Dutchwoman Femke Bol, who is one of most interesting rising stars of European and World Athletics and won the 2020 edition un Rome. Bol will face Olympic silver medallist Sara Slott Petersen and Anna Ryzhykova from Ukraine.

The jumping events will feature a high-quality line-up, which promises to be a preview of the Olympic Games in Tokyo. The men’s high jump only features jumpers with a PB of 2.33m or more. The line-up is highlighted by world champion Mutaz Barshim from Qatar, who is ranked second in the world all-time list with his outstanding 2.43m PB set in 2014, Maksim Nedasekau, who won the European Indoor gold medal with 2.37m in Torun. It’s going to be the best test for Italian record holder Gianmarco Tamberi, if he recovers from his right foot problem. The line-up also features Brandon Starc from Australia and European champion Mateusz Przbylko from Germany. The women’s long jump will be headlined by Malaika Mihambo from Germany and Maryna Bekh Romanchuk from the Ukraine, who won the world gold and silver medals in Doha, Ivana Spanovic from Serbia, Olympic triple jump champion Caterine Ibarguen from Colombia, Chantel Malone from British Virgin Islands and local favourite Larissa Iapichino, who started her athletics career in Florence. In the women’s pole vault reigning olympic champion Ekaterini Stefanidi will face Russia’s world champion Anzhelika Sidorova (ANA), Holly Bradshaw from Great Britain and Angelica Moser from Switzerland in a big-height clash.

The throwing events also grab the headlines at the Golden Gala Pietro Mennea. Tom Walsh from New Zealand starts as the favourite in a super shot put competition, which also features Michal Haratyk from Poland, Armin Sinancevic from Serbia, Tomas Stanek from Czech Republic. Local star Leonardo Fabbri, who grew up in Florence, aims to compete at the same level against the best shot putters in the world. In the women’s discus throw two-time Olympic champion Sandra Perkovic will be bidding for her fourth win at the Golden Gala after her victories in 2013, 2015 and 2018. The Croatian star will have to beat Cuban stars Yaine Perez (world gold medallist in Doha) and Denia Caballero.