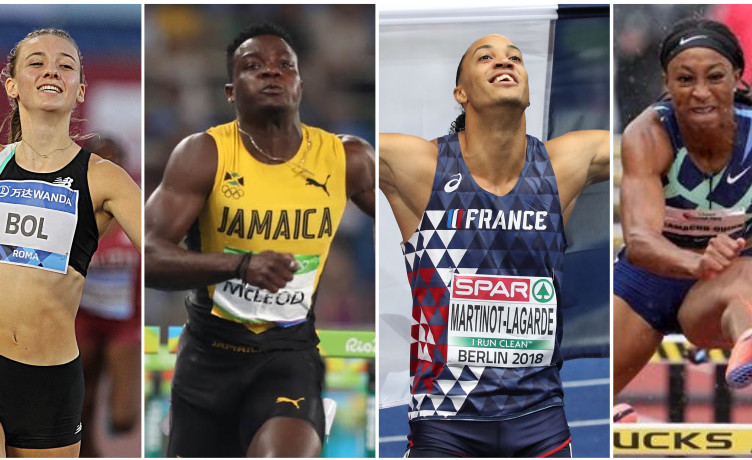 Three hurdles races and a lot of adrenalin on the Florence track for the third leg of the Wanda Diamond League. The Golden Gala Pietro Mennea on Thursday 10th June will light up with the women’s 100m hurdles, the men’s 110m hurdles and the women’s 400m hurdles. The star is Omar McLeod from Jamaica, olympic champion in the 110m hurdles in Rio de Janeiro 2016 and world champion in London 2017. The women’s races will have a lot to say in the build-up to the Olympic Games, especially with Jasmine Camacho-Quinn from Puerto Rico, and fans are looking forward to following Dutch rising star Femke Bol.

Men’s 110 metres hurdles: Omar McLeod against everyone. The olympic champion from Jamaica, who set the fifth fastest time in history with 12.90 in his career, opened his season with 13.11 last May and is the favourite in the men’s 110 metres hurdles. However, nothing is granted in Florence and the script has not been written yet, considering the results achieved at the start of the season by US Devon Allen (13.22) and Andy Pozzi (13.26), who are not already defeated before the start. European Indoor champion Wilhem Belocian from France (7.42 in the 60m hurdles in Torun), and world bronze medallist and European champion Pascal Martinot Lagarde (PB 12.95) have not made their seasonal debut this outdoor season. Martinot Lagarde was hindered by a muscle injury during the indoor season. European indoor bronze medallist Paolo Dal Molin will face the other medallists of the European Indoor Championshhips (Belocian and Pozzi) and can improve his outdoor seasonal best of 13.56 in debut in Rieti. The same can be said for the other Italian hurdler Lorenzo Perini (13.68).

Women’s 100 metres hurdles: The only meeting record, which has remained unbeaten since the first edition of the Golden Gala on 5th August 1980 a few days after the Olympic Games in Moscow, was set in the women’s 100m hurdles. The Golden Gala record has been held by Vera Komisova since then and breaking it would not be an impossible feat for Puerto Rico’s jasmine Camacho Quinn, who smashed her PB to 12.32 in Florida last April to stake a claim on the Olympic gold medal in Tokyo. The 24-year-old Caribbean hurdler is a relatively new name. She has not translated her class in major medals. She can seal her first win in the Diamond League circuit. The major threats come from other Caribbean hurdlers like Devynne Charlton (12.61 in 2021) and Pedrya Seymour from the Bahamas, Megan Tapper from Jamaica. The European contingent is led by reigning European champion Elvira Herman from Belarus, and also features Pia Skrzyszowka from Poland and Italian hurdlers Luminosa Bogliolo and Elisa Di Lazzaro, who clocked 12.84 and 12.90 respectively in Savona, have the chance to perform well.

Women’s 400 metres hurdles: Femke Bol is 21 years old and set a national record after the other, it does not matter if she runs the hurdles or the flat race. Bol is one of the European rising stars and will make her second appearance at the Golden Gala with the aim to clinch a back-to-back win after claiming the 400m hurdles in last year’s edition. Since then she has improved the Dutch 400m record to 50.63 indoor and 50.56 outdoors, and won two European Indoor gold medals in the 400m and the 4x400 relay. She is ready to break her national record of 53.79 set in the 400m hurdles last year. The women’s 400m hurdles launches the season of many big European hurdlers, like Olympic silver medallist Sara Slott Petersen from Denmark, European silver medallist Anna Ryzhykova from the Ukraine, Jessica Turner from Great Britain. The extra-European hurdlers in the line-up are Wanda Nel from South Africa, and Tia-Adana Belle from Barbados. Ayomide Folorunso and Linda Olivieri will try to keep the Italian flag flying.