Golden Gala: a night to remember in Rome 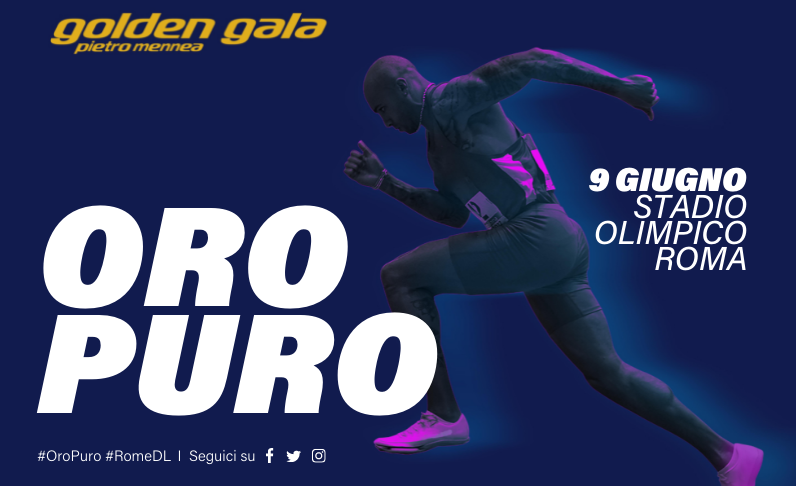 The 42nd edition of the Italian meeting of the Wanda Diamond League, scheduled on Thursday 9th June from 19.30, will bring the brightest stars of International athletics to Rome

An outstanding athletics evening to live in the Olympic Stadium, where the meeting was held for the first time back in 1980. The Golden Gala Pietro Mennea returns to the Olympic Stadium in Rome after the past edition was held in Florence. Crowd will be able to attend the meeting without restrictions three years after the last time it was held with spectators. In 2020 the meeting took place without audience due to the pandemic. On Thursday 9 June the Rome International meeting, jointly organised by the FIDAL and Sport and Salute, will feature a parade of stars for a three-hour track and field show. Among the most eagerly-awaited stars there are the seven Tokyo 2020 olympic gold medallists from Italy. It’s the first time that all of them compete together in the same event (with the exception of injured Antonella Palmisano, who will be in the Olympic Stadium and will be the co-starter of the 3 km walking race). The meeting was presented at the Olympic Stadium by FIDAL President Stefano Mei and by Diego Nepi Molineris, General Manager of Sport e Salute, this morning, on the track of the Italian capital’s Olympic Stadium during a press conference, which was attended by Olympic 100m and 4x100 relay champion Marcell Jacobs.

The women’s 200 metres look to be one of the most thrilling races of the evening because sprinters from all three sprint distances will go head-to-head. Reigning 400m Olympic champion Shaunae Miller Uibo from Bahamas will face European 200m champion Dina Asher Smith (Olympic bronze medallist with the 4x100 relay in Tokyo) and Olympic finalists Marie Josée Ta Lou from Ivory Coast and Mujinga Kambundji from Switzerland (world indoor gold medallist in the 60 metres in Belgrade last March). The line-up also features a special athlete, who made the history of world sprint: US sprinter Allyson Felix, who won 11 Olympic medals in the past five editions of the Olympic Games (including the 4x400 US relay gold medal last year), and 17 world outdoor medals (including 12 individual and relay gold medals). In her last year of activity (as she has already announced) her choice to compete in Rome, in one of the few appearances of her competitive schedule, shows her regard for the Italian fans.

The women’s long jump is the other top competition of the 2022 Golden Gala: Olympic champion Malaika Mihambo from Germany will take on world indoor gold medallist Ivana Spanovic Vuleta from Serbia, and two more Olympic finalists Maryna Beck Romanchuk from the Ukraine, Jazmin Sawyers from Great Britain and Italian young rising star Larissa Iapichino, who will chase an opportunity to get experience from a competition against the best athletes in the world. In the women’s pole vault Olympic champion Katie Nageotte from the USA will take on bronze medallist Holly Bradshaw and fourth placer Ekaterini Stefanidi from Greece, Olympic gold medallist in Rio 2016.

The discus throw and the shot put will feature and a world-class field of talented athletes. In the shot put US Joe Kovacs, Olympic silver medallist in Tokyo, looks to be the man to beat, but the eyes of the Italian crowd will be on the three Italian shot put specialsts: Zane Weir (fifth at the Olympic Games in Tokyo), Nick Ponzio and Leonardo Fabbri. The men’s discus throw will be a repeat of the Olympic final, as it features the entire podium of the Tokyo Olympic Games (Sweden’s Daniel Stahl, gold medallist, his compatriot Simon Petterson, silver medallist, and Austria’s Lukas Weisshaidinger, bronze medallist, and three more finalists Slovenia’s Ceh, who threw over the 71 metres barrier last Saturday in the Birmingham Diamond League meeting, Lithuania’s Gudzius and US thrower Mattis.

A great men’s 5000 metres race, a traditionally significant competition at the Golden Gala (two world records were set over this distance in the past and the first sub-13 minute race in history run by Said Aouita with 12:58.39) will be the highlight of long distance races in the programme at the Olympic Stadium. The line-up features Ethiopia’s Selemon Barega, and Uganda’s Jakob Kiplimo, who won the gold and bronze medals respectively in the 10000m at the Olympic Games in Tokyo. They will be joined by two-time world champion Muktar Edris from Ethiopia (2017 and 2019) and italian middle-distance running star Yeman Crippa, who will chase another convincing performance this spring after achieving a lot of great results. The men’s 3000 metres steeplechase features two of the three Olympic medallists from Tokyo: Ethiopia’s Lemecha Girma (silver medallist) and Kenya’s Benjamin Kigen (bronze medallist). The other athletes to watch are the three Italian athletes: Ahmed Abdelwahed and Ala and Osama Zoghlami, twin brothers from Palermo. The programme of endurance events is completed by a great 3 km walking race organised to celebrate the double Italian triumph at the Olympic Games. Olympic 20 km champion Massimo Stano will line up, while the other Olympic gold medallist Antonella Palmisano, will act as both ambassador and co-starter of the race.

In the women’s middle-distance races the star is Laura Muir, Olympic silver medallist in the 1500 metres, who will run in the three lap and three quarters race against some of the emerging stars, like Olympic finalists Gabriela Debues Stafford from Canada, and Winnie Nanyondo from Uganda. The women’s 800 metres will feature the clash between Jemma Reekie and Jamaica’s Natoya Goule, who finished respectively fourth and eighth in the Olympic final in Tokyo.