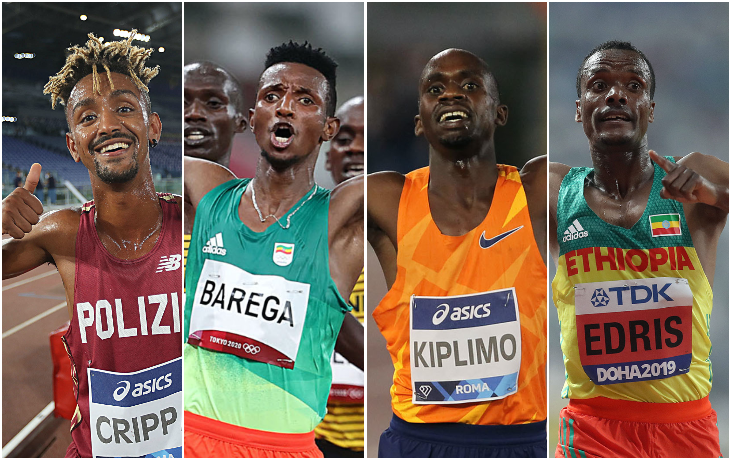 A star-studded line-up will light up the evening of the Golden Gala on 9 June. The 10000m Olympic champion Selemon Barega and the bronze medalist Jacob Kiplimo will headline a great men’s 5000m race, together with Muktar Edris, Yomif Kejelcha, Rhonex Kipruto and the Italian record holder Yeman Crippa (ph. Colombo/FIDAL)

An incredible mix of talented athletes. The world stars of middle-distance running will gather at the Golden Gala Pietro Mennea, the unmissable athletics evening on 9 June at the Rome Olympic Stadium, the fifth meeting of the Wanda Diamond League. The competition between medallists of the Tokyo Olympic Games and the World Championships is set to highlight the men’s 5000 metres. The stand-out name in the line-up is the 10000m Olympic champion Selemon Barega (Ethiopia), who triumphed in Tokyo over the longest distance and repeated his feat in the World Indoor Championships in Belgrade by winning the gold medal in the 3000 metres. Barega, who is the fifth fastest runner in history with his PB of 12:43.02 in Brussels in 2018, comes back to Rome three years after his second place in 2019, when he was beaten in the final sprint by his compatriot Telahun Bekele, who also returns to the Olympic Stadium for the 2022 edition of the Golden Gala.

There will also be the Olympic 10000m bronze medallist and reigning world half marathon champion Jacob Kiplimo (Uganda), and three medallists of the last edition of the World Indoor Championships in Doha, including 5000m world champion Muktar Edris (Ethiopia), who triumphed over this distance in London 2017 and in Qatar two years later, world 10000m silver medallist Yomif Kejelcha (Ethiopia), two-time world indoor champion in the 3000 metres, and world 10000m bronze medallist Rhonex Kipruto (Kenya). The field is rounded out by reigning Diamond League champion Berihu Aregawi (Ethiopia) and Italian star Yeman Crippa, who recently won the “Night of the 10,000m PB’s” in London and set the European record in the 5 km (13:14). Three world record holders over road race distances will line-up: 5 km (Aregawi), 10 km (Kipruto) and half-marathon (Kiplimo).

The 5000m race has a long tradition at the Golden Gala. The 13 minutes barrier was broken for the first time in the Rome Olympic Stadium in 1987 by Moroccan runner Said Aouita with 12:58.39. Another world record was set in Rome in 1995 by Kenya’s Moses Kiptanui with 12:55.30. In last year’s edition Norwegian star Jakob Ingebrigtsen set the European 5000m record clocking 12:48.45 in Florence.