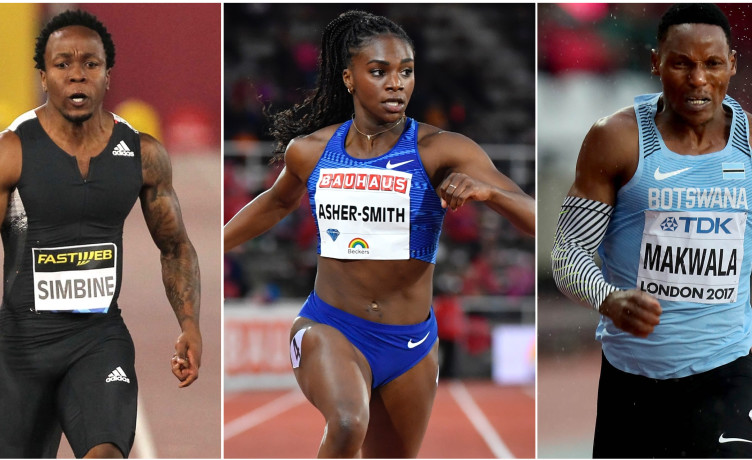 World champion Dina Asher Smith will run the 200 metres, South Africa’s Akani Simbine will face Mike Rodgers in the men’s 100 metres, Makwala will take on an Italian trio: the Italian leg of the Diamond League will be highlighted by thrilling races.

The Golden Gala Pietro Mennea in Florence, the third leg of the Wanda Diamond League, runs very fast. The women’s 200m stand out with world champion Dina Asher Smith. The men’s 100 metres will be a race to watch despite the withdrawal of Italian record holder Marcel Jacobs. The men’s 400 metres will be headlined by Anthony Zambrano and Isaac Makwala.

Men’s 100 metres: It’s the last race of the meeting (at 21.45), a burst of power and emotions. The jet-men will fight for the sprint throne on the Florence track. Fresh Italian record holder Marcell Jacobs has pulled out of the meeting due to the injury on the adductor of his left harmstring he sustained on 22nd May. The clash between 60 m European Indoor champion and South Africa’s Akani Simbine will not take place, but the fastest race still remains surely interesting. Simbine returns to Italy for his second consecutive win after winning this race at last year’s edition of the Golden Gala at the Rome Olympic Stadium, where he triumphed in 9.96. This year he dipped under the 10 seconds barrier with a legal 9.99 and a wind-assisted 9.82, but he set a lifetime best of 9.89 in 2016. US sprint veteran Mike Rodgers, reigning world 4x100 relay champion, will replace Jacobs. Turkey’s Ali Jak Harvey has a PB of 9.92. Arthur Cissé set a lifetime best of 9.93. Chijindu Ujah from Great Britain clocked 9.96. The line-up also features two sprinters, who are aiming to break the 10 seconds barrier: Cejahae Greene (Antigua and Barbuda) and Emmanuel Matadi from Liberia. The race is completed by Yupun Abeykoon from Sri Lanka.

Women’s 200 metres: How many stars in the women’s 200 metres, how many champions ready to set the Tuscan track on fire: the queen of world sprint Dina Asher Smith from Great Britain, who won the world title in the 200m and the silver in the 100m, Marie Josée Ta Lou from Ivory Coast, world bronze medallist in the 100m, Mujinga Kambundji from Switzerland, world bronze medallist in the 200m, and European record holder Dafne Schippers. Asher Smith showed her excellent form with 10.92 in the 100m in Hengelo and previously clocked 22.56 in her first 200m of the season on Italian soil in Savona. The line-up is completed by Beth Dobbin from Great Britain, Sarah Atcho from Switzerland, and two Italian sprinters Gloria Hooper, who won the 4x100 at the World Relays in Chorzow, and Dalia Kaddari, who improved her PB to 22.89 at the European Team Championships in Chorzow.